A recon platoon’s primary duty is to provide reconnaissance for the battalion and a ready reaction force when needed. In 1969 and 1970, we were in Echo Recon 1/5, 1st Air Cav assigned to III Corp Republic of South Vietnam.
We answered to nicknames, not as a way of avoiding closeness, as has been suggested, but to strengthen our bonds. We will forever be known to each other by those nicknames. Some of us were identified by our wives or girlfriends waiting for us back in the world, like “Roxy” or “Susie”. Some were abbreviations or middle names like “Hutch” or “Bird”. Others suggested physical characteristics like, “Turkey” or “Stallion”, while others just seem like a good fit, like “Mother” or “Rock”. 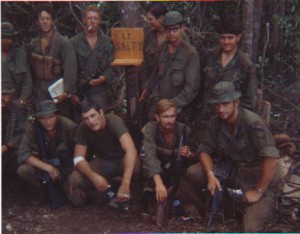 Whatever we called each other in the Cambodian Invasion of 1970 one thing is certain: A connection was formed which cannot be broken in spite of the passing of time.

The men of Echo Recon served their country well. We will never forget those who were wounded or died in a far off place, most before they were 20 years old. We hope this web page honors the memory of all who walked those trails with us, so very long ago.

If you are visiting our web site, we invite you to explore the photos and scrap book to learn more about us. If you are a member of echo recon, we hope that you will consider dropping us a note and keeping in touch.
The bonds remain strong.