You are here: Home / scrapbook / Stallion / A Tribute to Edgar Lee, recipient of the Congressional Medal of Honor

Edgar LeeThere is no more that a country can ask,
No more that a man can give;
Than when faced with insurmountable odds,
Lay down his life so that others might live.
He was a medic with Bravo, 1st of the 5th,
Of the Army’s famed First Cavalry;

His friends called him “Mac”; the grunts called him “Doc”,
To his family, he was Edgar Lee.
He was always the role model, and inspiration,
For his younger sister and brother;
And a source of immeasurable parental pride,
For both his father, and his mother.

He answered when his country called,
And left his family and friends behind;
For the distant shores of South Vietnam,
Not knowing what he would find.
What he found was the stark reality of war,
Man’s inhumanity to man;
He was driven onward by that inner voice,
That said, “Just do the best you can”.

And the best he could do is what saved the lives,
Of many men that day;

He was a man who put others before himself,
He was raised that way.
He fought for the principles of freedom,
But freedom comes at a very high price;

He ignored his wounds to reach his fallen comrades,
And made the ultimate sacrifice.
He went to the aid of the wounded men,
Without hesitation, or pause;
His actions were dictated by his heart,
Not politics or cause.
What he did went far beyond valor,
Beyond courage, far and above;
What Doc McWethy did that day,
Was the defining act of love.
And for those who have experienced combat,
Those that have tasted the fear;
It is the memories of the Doc McWethys’,
That those of us hold dear.

Because Vietnam vets don’t forget their brothers,
It’s an unshakable bond we share;
We will always remember,
And we will always care.
And we will hold a special place in our hearts,
When we bow our heads to pray;
For our comrade who earned The Medal Of Honor,
Thirty-five years ago today.
He will always be a hero,
Of the Army’s famed First Cavalry;
To his friends he was “Mac”; to the grunts he was “Doc”,

To his family he is Edgar Lee. 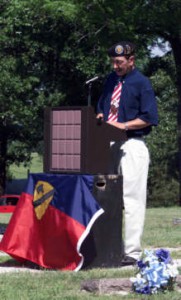