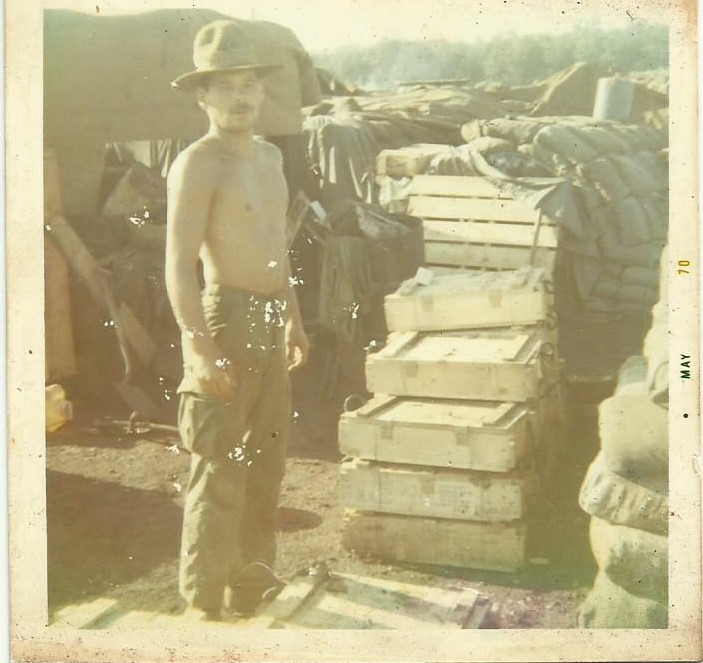 I heard a good story about Ace at the Charleston reunion. I think anyone who met Ace, a.k.a., Harold Davis, would remember him. A easygoing guy who liked to talk and play the guitar, he looked like a character actor from a crime movie. Not a thug, mind you, but a cab driver or bartender maybe.

So I heard… one day Ace was headed into Quan Loi with a jeep to pick up supplies. I also heard Captain Joyner was particular about his appearance and had his uniforms cleaned and starched by a mama san rather than the GI provided service. So the captain asks Ace to be sure and pick up his uniforms while he is in Quan Loi. What could go wrong?

So there is some delay in getting the supplies and picking up the clean, freshly starched uniforms; so Ace is delayed and the sun is going to be down soon. No time for a lone GI to be taking off on his own in Viet Nam.  Our battalion Hqs. can accommodate a trooper in this situation. Ace has a roof over his head for the night. What to do for the evening? Ace puts on the captain’s uniform and heads for the officer’s club.

Ace? Harold, what were you thinking? Surely you didn’t think you could pull this off?

I was thinking about this on the drive home. I’m sure the lure of hard liquor was too much to bear for Ace. You could only get beer at the enlisted men’s club. Apparently he was able to pull off this ruse for a period of time, but as more whiskey was poured and Ace had enlightened some officers with his stories, I’m sure it became apparent that whoever this guy was, he was no infantry captain!

I’m not clear on what happened next. Did they run him off? Did they make him strip down to his skivvies and walk back to his bunk? Was he arrested? I imagine Capt. Joyner was alerted and Ace had to high tail back to the firebase first thing in the morning and face the music. I can only think after being thoroughly chewed out, Ace was sent back to his mortar pit and told to stay out of trouble! Haha!

Note: Thanks to Paul Connolly for this story and Mother for the great photo.