Most anyone who served in the 1st of the 5th Cav, as well as the 1/7, 2/7, 11th ACR, etc. in the years 1969 to 1970 is likely to have been to Quan Loi. Here's a good idea of it's location. This base camp could be found approximately 60 miles north of Saigon and 12 miles from the Cambodian border. This is in Binh Long province, just to the east of Tay Ninh. First known as LZ Andy, in 1966 it was established as the base camp for the 1st Infantry Division. As a base camp, there would be … END_OF_DOCUMENT_TOKEN_TO_BE_REPLACED 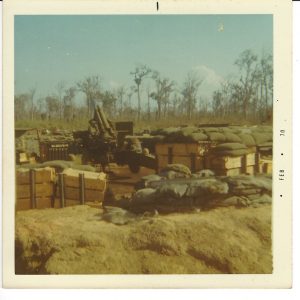 Bob Turay send these photos. That's a big gun. 155 howitzer. CComing back in from patrol. Eddie Dixon in one of the mortar pits at Vivian. That's a lota ammo! The Most Point Team Outstanding! Thanks Bob, will post some more later. Happy Veteran's Day and Welcome Home! Bird-out … END_OF_DOCUMENT_TOKEN_TO_BE_REPLACED 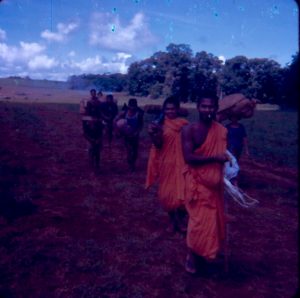 Last of the photos that Lt. Schottenhamel sent. Didn't really know to categorize them, then it hit me; smoke 'em when you got 'em applies to Buddhist monks as well as anybody. Or to a hog. Moving on. Bird-out … END_OF_DOCUMENT_TOKEN_TO_BE_REPLACED 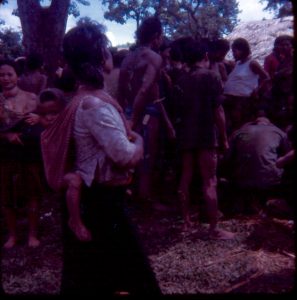 Hey Guys and Gals, Here are some more photos from Lt. Schottenhamel. He said 3rd platoon provided security for the Doc and medics while they cared for the local villagers. Great photos to say the least! The Lt. said the tribesmen played a concert for them. Outstanding! Bird-out … END_OF_DOCUMENT_TOKEN_TO_BE_REPLACED 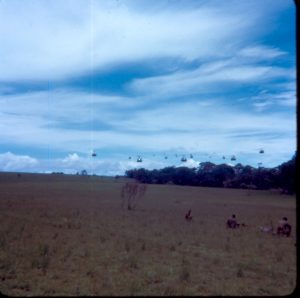 Hey everyone, Here are some of the photos that Lt. Schottenhamel forwarded to me. Great stuff, interesting to see after all these years. 49 years... Paul said they (Bravo Mongoose) were the first lift into David's location. Paul was a platoon leader with Bravo, 1/5. Bird-out   … END_OF_DOCUMENT_TOKEN_TO_BE_REPLACED

I was glad to visit with Dob Neuhaus at the Myrtle Beach reunion. He reminded me that we used to shoot the rats in our bunker with soap bullets. FSB Nancy was the first firebase I was at that we didn't have to build ourselves. That was the good news, bad news was the old bunkers were infested with rats! Now I remember! We would "pull" a bullet from an M-16 round and shove the cartridge into a bar of soap. Gee whiz Wally! We can safely shoot our rifles inside the bunker! Blam! One dead … END_OF_DOCUMENT_TOKEN_TO_BE_REPLACED

In memory of Tim "Salty" Brown (Photo: Cossey)   Greetings all, Just trying to remember everything that went on at our first big cache site. I recall walking off another LZ nearby where we had flown in. I believe that may have been Bravo Co. They had a cache site of their own there. They had secured that and cleared an LZ. Don't know if it had a name. This was as rugged a place as I have ever been. Steep, steep ridges covered with heavy jungle. We started down a road from … END_OF_DOCUMENT_TOKEN_TO_BE_REPLACED

If I ever stayed at a miserable sh-thole of a place, this is it. The monsoon rains had begun in earnest & everything; the ground, your gear, the ponchos were muddy & wet. This is the only time I know of when Recon "dug in". We all spent some miserable nights in our muddy foxholes. There was no chance of setting up a shower in this place...an enemy cache site on a ridge in Cambodia. We hadn't been on the move as we usually were and so were not able to bath in the streams. All these … END_OF_DOCUMENT_TOKEN_TO_BE_REPLACED

On my way out of Taipei following my R & R, I was walking through the customs free area in the airport and spotted a bottle of Kessler whiskey. Hell, that's Martin's preferred drink! I immediately purchased a bottle and stowed it in my bag. After arriving back at FSB Nancy, I unpacked and placed that bottle on a shelf in the bunker that Cossey and I shared with Dob. The next morning we were informed the Colonel would be inspecting the men's quarters. When the hell did the Battalion CO … END_OF_DOCUMENT_TOKEN_TO_BE_REPLACED

Fire Base Ann April, 1970 Memory is a funny thing; why one day or night would stand out, one event is so vivid and others aren't. I have a great memory of one night on Ann. I had been out with Recon on my first patrol.  We had walked off, patrolled several days and walked back in. There was plenty of beer for Recon and by the time the sun went down, everyone was three sheets to the wind. Well, of course, Cossey would have been sober, but I think he was listening to the Armed Forces radio … END_OF_DOCUMENT_TOKEN_TO_BE_REPLACED