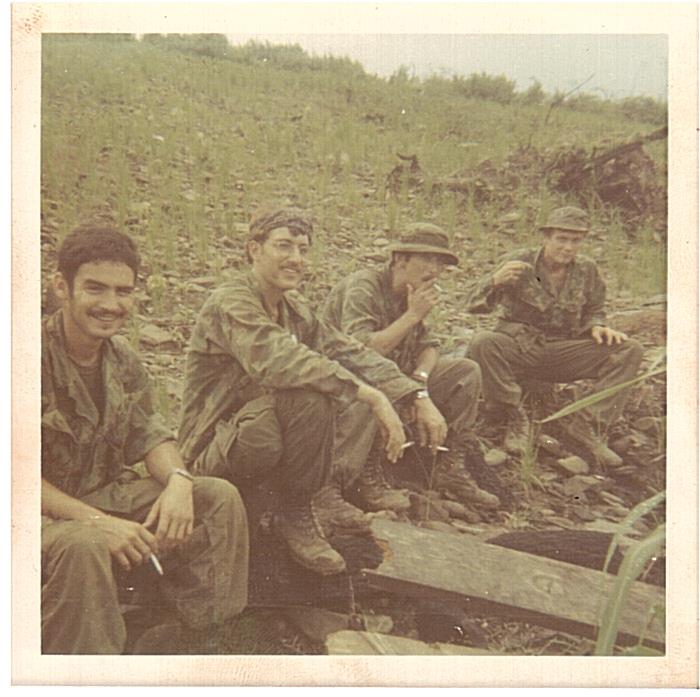 Chico, myself, Burleson and Jobe stopping for a smoke break somewhere in Viet Nam.  Chico was brave to a fault in the tradition of latinos serving in the armed forces. He was quick to smile, always ready with a comment in any situation. I have two distinct memories of Chico, a.k.a., Edmundo Gutierrez or “Doc”.

One time near LZ Salty that I have mentioned before, we were pinned down by an enemy machine gun in a hidden bunker. Ski and I had managed to get to a huge tree and Cossey was trying to take cover behind a very small tree. We were all amazed to see Chico, rifle at the ready advancing near us. Coz yelled at him to get the hell down, which he did. I think he was hit shortly after by “friendly fire”, some shrapnel from the gunship rockets. They were coming in right over our heads.

Chico… Chico… were you going to take care of that machine gun for us?

A second memory that seems like almost yesterday, a patrol from LZ Kuhz was ambushed and we took several wounded; I have mentioned this before as well. I was assistant medic for a few moments as Chico began patching the wounded up.

By this time in Cambodia, we had been there 6 weeks or so. Tim Brown had been killed in action, LT, Cossey, Martin, Ski all wounded on May 30th. Roxy had been wounded, as well as Lt. McGough and Chico I already mentioned. Now on LZ Kuhn, we had lost a combat engineer killed and many wounded including Mother’s 3rd. In my youthful ignorance I was learning what war meant. Now another ambush and more wounded, A desperate feeling came over me.

Chico was talking to me about his supplies. Oh really? In the most matter of fact way he was discussing his supplies and having to make sure he had enough, to be careful about conserving everything. Meanwhile, everyone is blazing away, returning fire. Top from Alpha Co. is firing the LAWS rockets that he was carrying. Chico was talking about the tape now while I held some gauze over a wound.

He was talking about the tape!

Oh Chico? Did you forget to be scared?

Well it helped calm my nerves, his routine conversation about work. He was right about the supplies. Three more Recon members were wounded that day including a grievous wound to Jerry Trumm. Chico was there, stopping the bleeding, laying on the gauze and tape.

I’m trying to remember the last time I would have seen him and I’m really not sure. That bothers me and I’m going to have to think about it.

Thanks to the due diligence of Mother and Toni and the folks at findagrave.com, it seems certain that Chico died of head injuries resulting from a car crash at Fort Sam Houston, Texas in 1971. He is buried in Zapata, Texas.