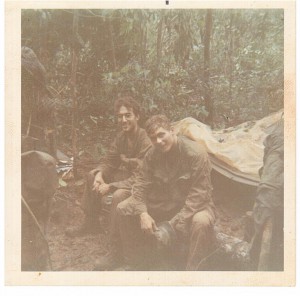 If I ever stayed at a miserable shithole of a place, this is it.  The monsoon rains had begun in earnest and everything was wet; the ground, your gear, the ponchos were muddy and wet.

This is the only time I know of when Recon “dug in”.  We all spent some miserable nights in our muddy foxholes.  There was no chance of setting up a shower in this place.  We had set up in our position in the middle of an enemy cache site on a ridge in Cambodia cuz that’s what the air cavalry does.  We hadn’t been on the move as we usually were and so were not able to bath in the streams.  All these years later I’m so particulary glad I wasn’t killed here; not only to die, but to think of death in such a filthy state seems to disturb me a great deal.  Such is war.

Mother was badly wounded here in the infamous Ice Cream Ambush.  I need to tell that story as well. It probably deserves it’s own chapter.  Degree also received a bad wound here, Kansas and Wayne Roe were wounded by enemy fire. Bob Cossey received some “friendly” pieces of shrapnel on the same day.  As did Red, both hit by a GI grenade that hit a tree and bounced straight back to us!

I am forever haunted by a dead combat engineer shot and killed here.

So why are Jobe and I smiling? I think it’s a reflex; you always smile for the camera. “Hi Mom! I’m fine.”  As a friend of mine always says, “No worries!” (Photo: Cossey)

LZ Kuhn was just a hop, skip and a jump from LZ Salty.  We were simply moving up the ridge to the next cache site.  More thatch roofed “hootches”, filled with big bags of Chinese rice and typically with a false floor.  This cover of poles and dirt hid many, many rounds of rocket and mortar ammo all stacked in deep pits.  The NVA had been doing a lot of digging!  Apparently they didn’t like us there…coming around to shoot at us every day it seemed.

We no longer had a Lt. with us after Lt. Mc Gough got wounded in the enemy bunkers near LZ Salty.  I remember one day there was a loud klunk in front of the perimeter where Recon was dug in.  The Alpha Co. 1st Sgt (Top) came over to where Recon was and “suggested” we go after them…it had sounded like someone dropped a weapon onto a box or something.  No one said anything but I gave him my best, “You’ve got to be fucking kidding!” look.

Top then said he would walk point. Coz said “OK, we’re game” or something like that.

I know I remember this day so well because of all the shooting and drama of it, but I think it also stands out because of the way it transpired.  Top, as ranking enlisted man on the LZ , could of ordered us to “saddle up”.  He wasn’t part of our chain of command though.   Really he did ask us, as I recall.  Like, don’t you guys from Echo Co want to go find out what’s up?

Before long we had saddled up and moved out toward the nearest “hootch” that was outside our perimeter.  Top was walking point with an M16 and a couple of  LAWS rockets slung across his back.  Cossey was behind him.  I was further back in the file with Kansas and Wayne Roe.  Kansas had been pulled from the firebase to be a rifleman and Roe was there as FO.  We had been assigned some FNG’s (F-cking New Guys) as well, Degree and Red.  I remember Burleson being with us.  Ski and Jobe were there as was Dob.  Undoubtedly, Martin & Coppella with their M-60’s.  Several grunts from Alpha Co. were tagging along.

We didn’t have far to go, I don’t think we went more that 50 m. from our perimeter before the NVA opened up with AK’s and RPG’s.  Kansas & Roe were both hit.  Kansas with a stomach wound from shrapnel and Roe with a bullet in his shoulder.  Chico was there immediately, treating their wounds and covering them with gauze bandages.  I remember this quite well.  Roe was on the ground leaning on his good elbow and talking on his radio to whoever a forward observer talks to…it would do us no good for the moment, we were right on top on the enemy.  I’m sure he was required to be in touch with command and control (C & C) at the firebase anytime we were in “contact” with “hostile forces”.  So he’s doing his job while I hold a gauze pad on his shoulder and Chico tapes it down.  Chico in a rather matter of fact way starts talking about the need to conserve his supplies.

Chico! Edmundo. Doc, is this just another day at the office?  Patching up the wounded GI’s, seeing them off on the Medevac bird and going back for more.  Concerns about bottles of plasma, gauze & tape…

Meanwhile, Top is throwing grenades like a kid chuckin’ balls at an arcade back home.  Almost everyone is on line and blazing away at the NVA.  I’m afraid they’ve had time to prepare positions and are willing to shoot it out with us even though I never see one enemy soldier.  We are still getting return fire.  I go with a small group to carry Kansas back to the LZ and get more ammo.  I recall several grunts from Alpha showing up to go back with us with -more grenades-, of course.  We return to the ambush site and distribute what we’ve brought.

Top throws a grenade that hits a tree and bounces right back to us with a distinctive thunk!
Everyone hits the dirt!  The underbrush is very heavy here and aside from the concussion it seems everyone is alright.  I remember this well…Top actually said “Oops” when he hit the tree.

Not long after this, Degree in a low crouch executes what can only be described as a “flanking movement right”.  He is to our right. I think Dob is there also, but Degree is hit by an AK round.  He goes down, hit in the abdomen with a serious wound.  Chico treats him as best he can, trying to stop the bleeding, etc.  Top picks him up in the “fireman’s carry”, Jerry cries out in pain, moaning.

They rig a litter for Degree and we start pulling back.  The medavacs were busy today.  After he’s been flown out, both Cossey and Red have apparent shrapnel wounds.  Coz’s knee swells up to where he can hardly walk.  He was right up front when Top threw that errant grenade.  Red’s chest is swelling up in an alarming way.  He doesn’t look too good.  Call for another “dust off”!  I am near the LZ clearing, waiting to see them off.

Before they can be flown out there’s a loud explosion on the far side of the LZ!  What the hell?  Then the unmistakable sound of an artillery shell coming in and kaboom.  Shit, those are 105’s!  The firebase (FSB David) is hitting our LZ by mistake, the shells are “walking” our way!

Chico, you little latino motherfucker, they are bombarding your office!

Suddenly, I love my muddy hole and have the greatest desire to be in it.  I would dive headfirst into the puddle of water at the bottom if I could.  But it’s too far away, no time to run.  We can only throw ourselves into the mud and make ourselves as small as possible… a terrible feeling.

Miraculously, no one is hurt despite 3 or 4 shells coming in before they stop.  One landed close to the Recon positions and shredded the ponchos that were rigged over the foxholes.  I believe somewhere there is a photo of Martin, grinning and pointing to his.