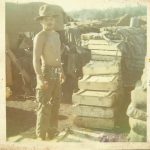 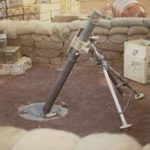 Green Tracers in the Night

At Lz Eagle 1, there was some sort of action taking place almost every day and night. Usually, it was enemy sniper fire, mortars, or troop probes, with a major attack about once a week for four or five weeks, thrown in for good measure. One of our guys figured out while at Eagle 1, we averaged about four hours of sleep per day and that was never all at once.  One night the North Vietnamese Army (NVA) attacked, and we started firing our mortar into the attackers which were on the other side of the base. Shortly, after we started to fire, the bunker to left was the target NVA .51 caliber machinegun firing from the jungle. We could see the green tracers hitting and ricocheting off the bunker. It then fired a few rounds at our mortar pit. and then really started to put heavy fire to the bunker on our right. The dirt perimeter berm was high enough so that most of their fire at us went into the berm, with some rounds hitting and going through the upper part of our mortar pit. However, whenever the gunner rose to fire mortar rounds, he was high enough to get hit. We could see where the machinegun was firing from and by staying low, we moved the mortar tube around so that we could place the fire on the machinegun. We did not see any muzzle flashes from rifles, just the machine gun’s flashes and the green tracers it was sending into the bunker. We fired five or six rounds into the location of the machinegun. The rounds appeared to be on target since the machine gun quit firing. With a .51 caliber machine gun firing at at the bunkers and at us we really expected to have some sort of probe or attack from that area, but nothing else happened from that direction. We immediately went back to firing support elsewhere on the base, but we were sure to keep an eye on the area in front of the bunkers. I don’t know if we knocked out the machinegun or if they just move away. Either way, they quite shooting at us. And that’s what counted.