A friend showed me this book. 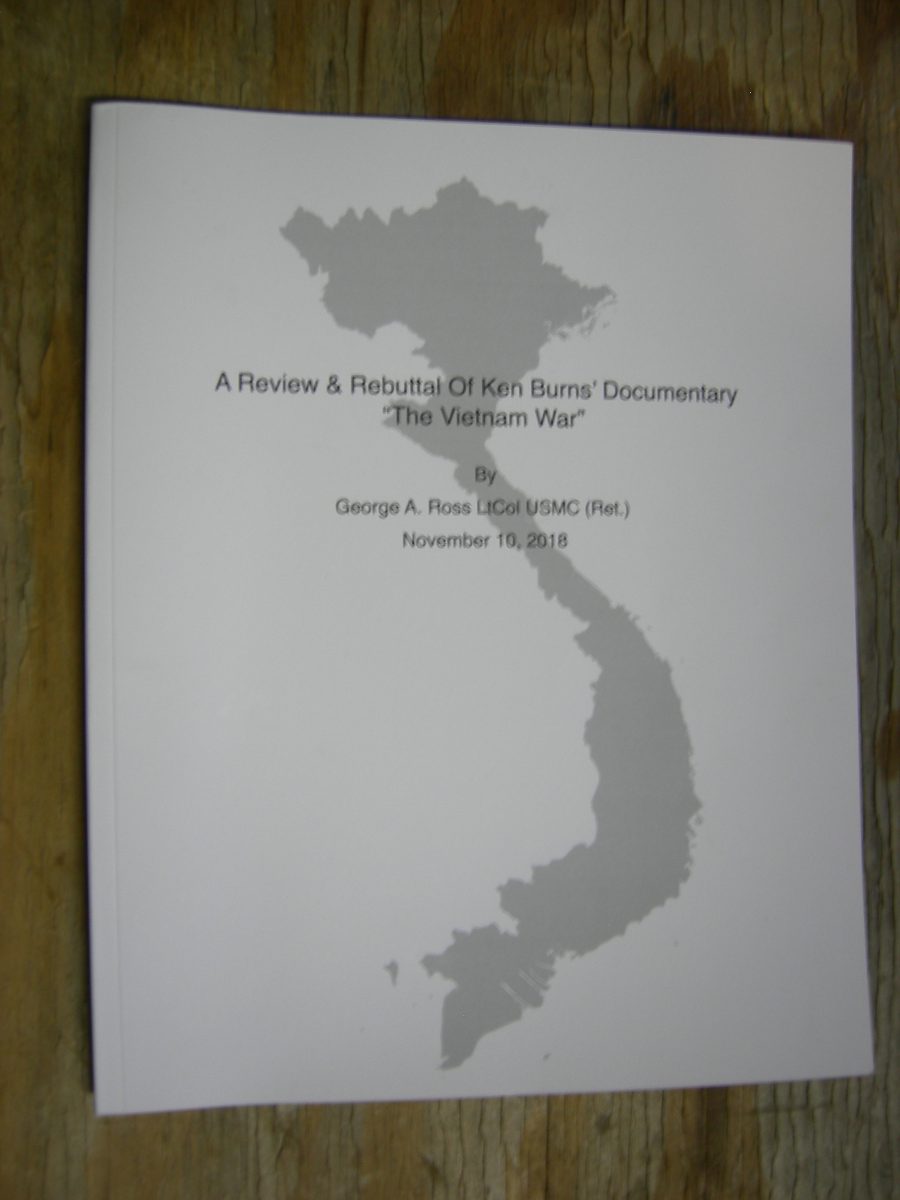 A Lt. Colonel in the Marines, George Ross raises some interesting points. He served as a helicopter pilot in 1967 and ’68. It’s been several years since I viewed the documentary and I would say I didn’t raise any objections while watching, except occasionally, I would think something was over looked. Overall, I thought it was well done and I was pleased to see the interest generated in the viewing public. Ross has taken a serious look at it and has objections in some of the portrayals. For example, emphasizing the brutality of the war, especially the harm done to Vietnamese civilians by American forces, and not giving equal time to Communist war crimes.

Ross also points to the geopolitical situations that lead to the war and the decisions by US leaders that sustained and increased our involvement without a good strategy. He blames the three administrations, starting with Kennedy’s, with poor judgement and willingness to risk American lives to no good end. He feels Ken Burns did not shed enough light on this.

He points out that Burns and company surely had never read “Dereliction of Duty” by H. R. McMaster. Curious about that, I had never read it either, I picked up a copy at the local library. 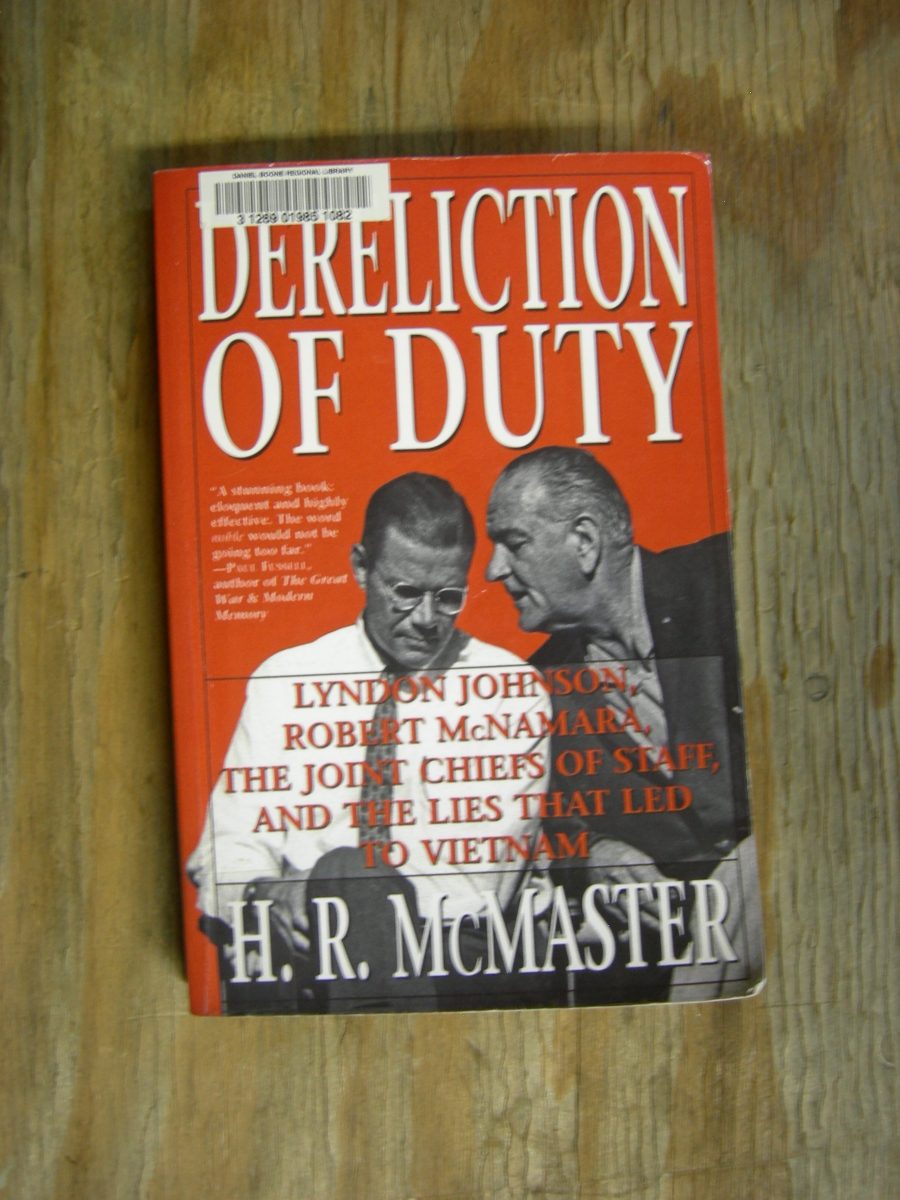 This is a good book, but I have just been reading portions of it. It is well written and points to the shortcomings in the decisions by the US administrations. The work of the Joint Chiefs of Staff was inadequate and influenced by politics and rivalries between the different branches of service. Lyndon Johnson continued to work as he had as a congressman from Texas by seeking consensus as he had in the past. This meant that he bent people to his will or replaced them until he got the “consensus” he wanted.

Perhaps the most damning evidence of failure is the “plan” to assist the South Vietnamese if things didn’t go well.

Of course, we all know they didn’t go well.

This was in the advisory phase, before any ground forces were deployed. The signs were already there, that the South Vietnamese were not capable of stemming the tide of infiltration or protecting the hamlets. They also were failing to win over the peasant population as the communist cadres were able to do. Still we started a half ass gradual increase of support, just to see if a little bit more training and equipment would help. The communists would always increase their activities as this was done…tit for tat, so to speak.

In the beginning, the justification for bringing in US combat ground forces was to secure the airbases and important facilities from attack, so that the South Viets would have more troops active in the field to fight the Cong. This did not go well either. The deception by US leaders is apparent as well…sending the 173rd Airborne Brigade from the Phillipines with out any public knowledge was just the beginning of this shameful behavior as told by McMaster. A lot of this was driven by LBJ’s concern for the politics and elections back in the USA.

In hindsight, critics point to the bombing of North Vietnam. The critics are saying if the devastating effects of heavy bombing would have been used earlier in the war it could have affected the outcome.

Ross also takes issue with the documentary’s portrayal of the ’68 Tet Offensive. While a massive tactical defeat for the NVA, they lost thousands of VC and NVA troops, it was a strategic victory for them due to the publicity and coverage by the media. He thinks Burns missed an opportunity to help set things straight.

One thing on McMaster’s list of dirty deeds, something I wasn’t aware of, or certainly don’t remember, is the complete withdrawal of funding for South Vietnam by the US Congress immediately following the resignation of Pres. Nixon. This was August 9, 1974.

So there’s some interesting reading, if you are interested. The only thing that bothered me about what Ross wrote is he mentioned twice that all US ground combat forces were withdrawn by 1970. That’s way off. It was 1973.

I can re-watch the Burns documentary on PBS and plan to do that “in my spare time”.