Lt. Frank Szczebak served briefly as platoon leader for Recon in May, 1970. He was assigned to Recon after we were already in Cambodia. As I recall we had been out on patrol near FSB North with Lt. Jenkins* as platoon leader. We were close enough that we just walked back on to the firebase. Enter a new platoon leader, a position Szczebak had been filling with Bravo Co.

Szczebak was a likeable fellow with an unusual name, but someone who took their job seriously. He took command of our rag-tag looking group while we were on North for a day or so; resting, getting some hot chow and refilling our canteens. Cleaning weapons and restocking our ammo. Showers and beer, hot or cold, were to be infrequent events in Cambodia. I don’t remember any here. I think what strikes me most about L-Tee would be I can’t recall if he ever raised his voice or cursed at all. Something unusual in the infantry to say the least. No one could say that about me! Of course, when in the field we were trying to be quiet! Make that extra quiet.

We had been guarding a bridge on Hwy 7 south of Snoul to insure the 11th ACR could get through to the city where they were engaging the NVA ( North Vietnamese Army ). We had spent an exhausting day humping in and out of an enemy bunker complex where we killed at least 6 NVA and had taken at least one casualty; Dob was wounded by a Chicom grenade, but for the most part things had been pretty quiet for Recon. That was about to change. After loading up at North and changing platoon leaders, we were sent into O rang, Cambodia to have a look around. I think the brass were wanting an assessment of the situation there. Were there any NVA or VC there? No, but there was fresh pineapple on the plants…and it was good! Seriously, there was a Cambodian Army post there, which was deserted. There was a dirt airstrip that I think was the focus of the brass at that time; could it be used to bring in supplies? Yes it could and I think it was key to where FSB David would be built. 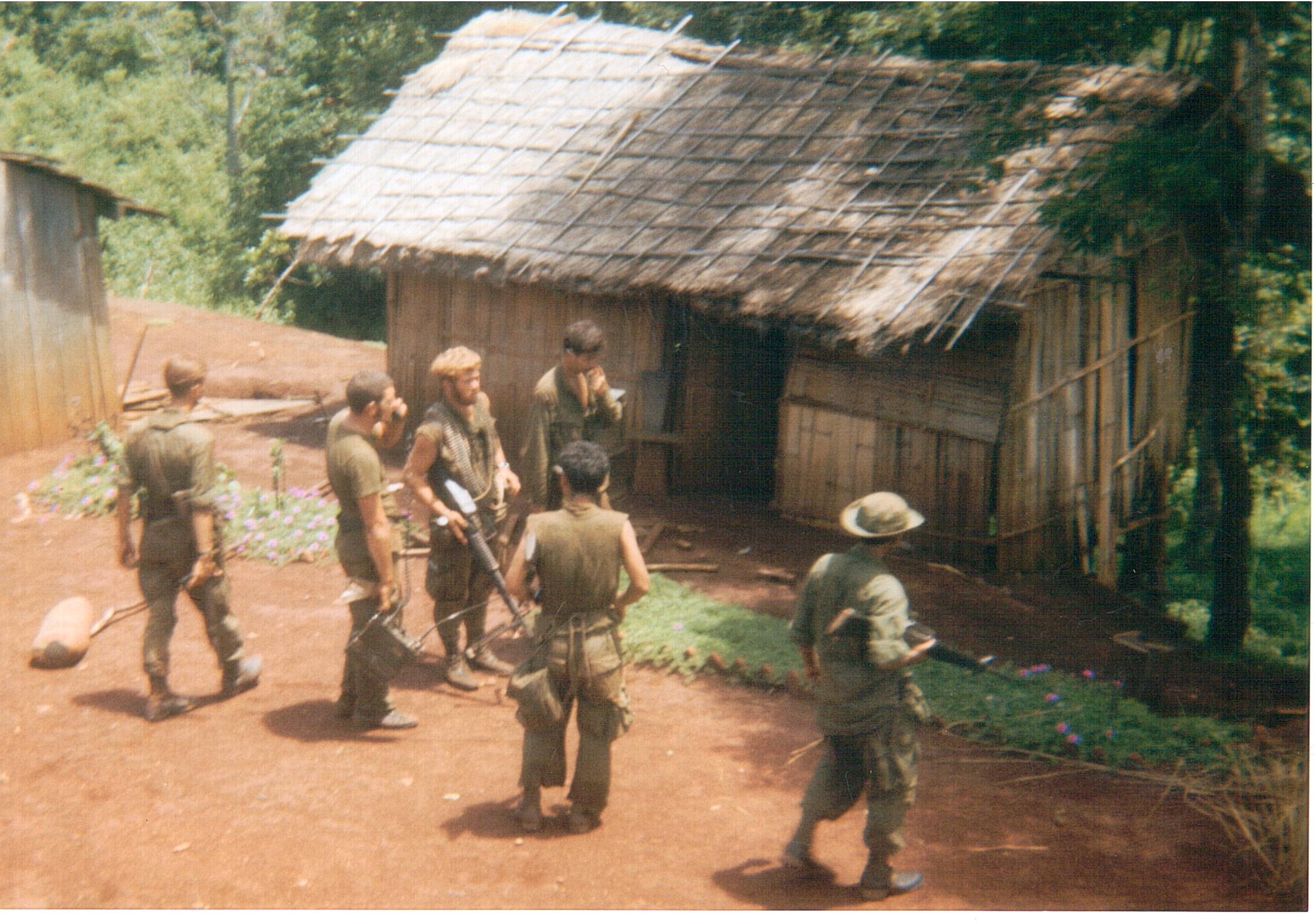 What I wanted to say about L-Tee was even though he was not with Recon a long time it doesn’t seem that way. Our short stay in O rang was almost idyllic and seems longer in my memory than perhaps it really was. We moved out of O rang and headed into the beautiful rolling hills of Cambodia. I remember walking into a Montagnard village with L-Tee and the gang. I really had not been long in the field at this time and thought I was having a hell of a adventure. There was a small number of people in the village as I recall. One fellow with a long ponytail and loin cloth drew our attention and when questioned by the Cambode scouts he began to look suspicious. He was saying, “No VC, no VC here!”, well of course, the Ho Chi Minh trail was just over the hill. We couldn’t see it, but it was no more than 100, maybe 150 meters away.

The platoon headed out of the village towards the trail. I could see a lone NVA off in the distance and below the ridge. I guess I wasn’t expecting trouble just then ( Oh really? ) and didn’t realize right away he was a soldier, not a villager. The scouts started yelling, “VC! VC!” and we fired off a few shots his way before he disappeared in the jungle. We headed down that way following the trail and set up a night position. It was this day that Stallion took his leave of the platoon and Tim Brown arrived. We had no way of knowing it at the time, of course, but Tim had less than 24 hrs to live. He was killed in a brief firefight the next morning as an “RPG squad” ( North Viets armed with rocket propelled grenades ) came down the trail to where we had set up  our position. L-tee remained calm under fire and helped us through a bad situation. He was ordered to move Recon north up the trail and “reengage the enemy” as the afternoon monsoons started. The rain saved my life; near the top of the ridge I walked directly into an NVA outpost. The “guard” was wearing a pith helmet and had his head down… I guess because of the pouring rain and perhaps his mind had wandered to thoughts of his girlfriend back home or maybe it was Mama’s dumplings!

I don’t know what Tim “Salty” Brown could have thought about this, but there was about to be some serious “payback” the afternoon of May 30, 1970.

This was also L-Tee’s last day with Recon. Like everyone else in the front of the file, he was quickly emptying the 30 round mags for his M-1 Carbine. When I ran down the trail later looking for more M-60 ammo, I saw him crawling along the trail. I ran over to him to ask about ammo, then realized he had been wounded in the leg. I started to pull my field dressing out and he just waved at me to go and said, “Get the ammo!” Ok, I think he did raise his voice.

We would see him again, of course, when he was commanding officer for Echo Company back in Viet Nam. We talked at times of the events of May 30th, he said he was forever grateful to the pilots that picked him up from a hot LZ and the Recon troopers who carried him to the Medevac.

Back in the world, Lt. Szczeback signed up for the National Guard which helped pay his way through law school. He stayed in the Army for 24 years and was eventually a Judge in the U.S. bankruptcy courts in Washington, D.C.

Lt. Szczebak became seriously ill and died in 2010. He is buried at Arlington National Cemetery. I never saluted you in the field L-Tee. I salute you tonight.

*In hindsight, I regard Jenkins as something of a dud. I think he was simply putting in some time in the field and planning to put that on his “resume”. Just my guess. Perhaps the brass was looking to have a more aggressive or competent officer at that crucial time.