In memory of Tim “Salty” Brown 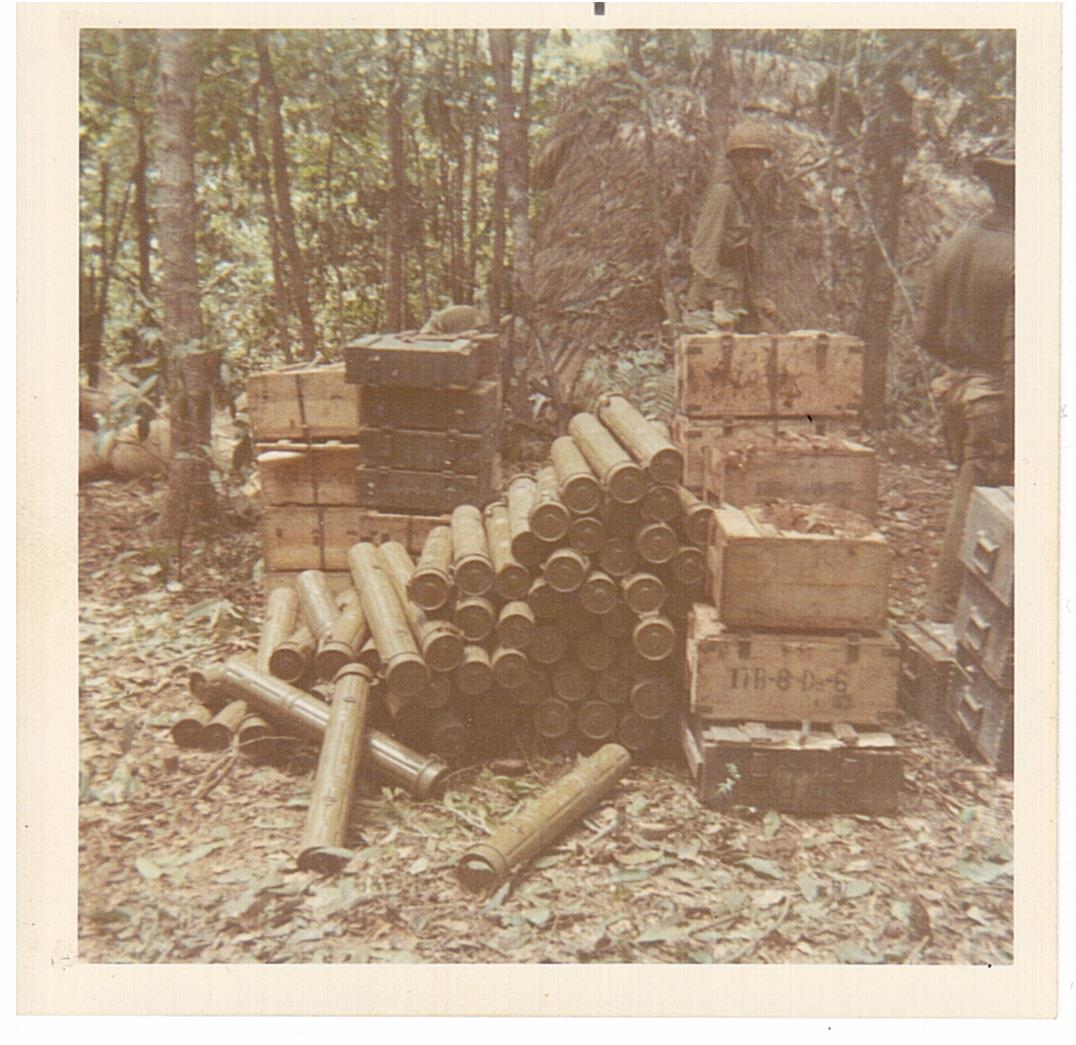 Rocket & mortar ammo. This is just a sample.

Just trying to remember everything that went on at our first big cache site. I recall walking off another LZ nearby where we had flown in. I believe that may have been Bravo Co. They had a cache site of their own there. They had secured that and cleared an LZ. Don’t know if it had a name. This was as rugged a place as I have ever been. Steep, steep ridges covered with heavy jungle.

We started down a road from there. A road hidden under the jungle canopy and booby trapped. We quickly got off that and walked parallel to it for a while. We moved downhill until we came to a steep ridge. No one had told me, the point man, that we were headed in the back door to another weapons and ammo cache. I was just trying to stay on the given azimuth. Climbing that ridge seemed like an all day job; so steep we were grabbing roots and pulling ourselves up. Well it worked, the NVA on the ridge apparently didn’t know we were showing up that day. We set up a night position near a main trail running along the ridge top after putting an AA (automatic ambush) across it.

Early the next morning we heard (and felt) it go off; an NVA Lt. was leading his men toward us and was killed by the blast. Score one for Recon. Really two, an NVA was screaming horribly following the blast and was dragged away by comrades before we could get to the trail. Believe me, they were the screams of someone who didn’t have long to live. We checked out the dead Lt. Well, he certainly was a dead NVA; unfortunately his AK was badly damaged and not worth saving. He had a pistol though, I think it was a Tokarev automatic. Mother ended up with that one, but he never made home with it.  He did make it home so we’re just glad about that.

We began to check out the hooches that were scattered along the trail. Built on the spot out of downed trees with a raised floor and thatched roof. They were all full of rice. Big bags, I would guess they were 60 to 80 lbs. We were there at that particular ridge because a pilot had spotted some of these structures. In military slang, a “hooch” or “hootch” is a rudimentary shelter or bunker. I imagine we were looking at the third hooch and taking a break; sitting down and resting when someone wondered why they all had bare dirt under the raised floor. This guy ( I don’t remember who it was ) was a real sleuth; why wouldn’t there be plants, vines, etc. under there like everywhere else? Remember we were in a jungle. He began snooping around and realized there were logs under the bare dirt; the logs were a ceiling to a hidden storage bunker full of ammo! And we’re talking lots of ammo, many boxes of mortar shells and rockets. Dang! It was a helluva stash and almost every hooch had one.

This discovery started a whole series of events, the first of which was the arrival of combat engineers, who rappelled in through the jungle canopy bringing explosives, chainsaws and all the tools that engineers use. I remember those fellas were really keen on blowing down the trees with plastic explosives.

Fire in the hole!

I remember when they got enough room, they brought in a bulldozer with a larger bird, I think it was a Chinook.  I believe it was during this time; the building of the LZ, that Roxie was hit in the arm with some shrapnel from one of the explosions.

LZ Salty became a busy place with grunts and engineers hauling the rice to the clearing and the engineers rigging sling loads. Alpha Co was flown in to help the secure the cache and haul the rice.  Ammo was being hauled but it seems the priority was given to the rice. It was being flown to refugee camps and places where it was needed. Ammo could be destroyed in place.

Recon began patrolling in the direction whence the NVA Lt. and his men had come. As it turns out, we had set up camp not far from an enemy bunker complex.

Outstanding! Welcome to the air cavalry!

If I was ever in a god-forsaken place, this is it. God had built a vast, vast jungle and then forgotten about it.

Our first excursion to where the enemy was dug in, we got pinned down by an enemy machine gun firing from a well camouflaged  bunker. Damn, it was like a real war. We “popped smoke” at our position and the Cobra gunships that had flown out to support us came in right over our heads and pounded the NVA positions with rockets and grenades from their launchers. The machine gun wasn’t giving up and some of our guys were getting shrapnel wounds from the rockets including Chico and Lt. McGough, our new Lt. Well, I’m certain McGough was hit; a medevac was called in to the LZ before long and we never saw him again. It was not life threatening as I recall, but bad enough…”friendly fire”. Ski and I had been able to shelter behind a huge tree and were as safe there as one could be in that situation. Cossey was nearby behind a small tree as low to the ground as he could get. At one point we saw Chico, rifle at the ready, advancing near us. Cossey yelled, “What the f_ck are you doing Chico! Get down!”. Discretion being the better part of valor, Chico took his advice. After the last salvo of rockets, Chico took some shrapnel in the ass, haha. Well, that’s what I remember, maybe it was McGough that got it in the ass. We pulled back to the LZ, determined to crack that bunker some time, but maybe not sure how that was going to happen. A Phantom jet was overhead carrying a 500 lb. bomb, but there was no way they would let him drop that; we were way too close to the bunkers.

Amazing as it seems in hindsight, I don’t remember anyone else getting hit while we were at Salty. Except, of course, Kuhn was wounded near those bunkers, a couple of days later.

On a forgotten patrol in that jungle, several of us went out with a platoon from Alpha trying to show them where the bunkers were. We had slipped across main trail and stayed to the far side away from the bunkers.  Then after re-crossing the trail we came upon a secondary trail leading into the bunkers. We stopped there and before long a lone NVA came ditty bopping along toward the bunkers. Sol, the youngest of the Kit Carson scouts was with us and was right next to the trail. He looked at me to see if I saw what he saw. I did, and quickly nodded to him as he turned back and fired just in time to kill the enemy soldier. I hit the dirt and crawled toward Sol. The NVA was down and appeared to be on his own. We cautiously advanced along the trail and searched and cleared the area. For all the world he must of been by himself. Then Mother remarked on his repose. The young NVA was laying there straight as a pin, no visible wound, eyes closed and hands folded across his chest. Surely he didn’t roll over and just die like that. I was getting used to seeing them shot full of holes and their legs blown off. So it was strange. Who the hell did that? There had to be another enemy soldier. Well, no matter, we couldn’t just hang around there. We had given up any chance of sneaking into the bunkers. Get outa here.

Wherein, the ambushers become the ambushed. Maybe it would have been better to go back the way we came, but we didn’t. From the standing orders of Roger’s Rangers, along with “Don’t forget nothing.”, was order #11-“Don’t ever march home the same way. Take a different route so you won’t be ambushed.” Well, we stayed on the same side of the main trail (the bunkers were now between us and the LZ) and as we tried to slip around them we walked into some of the NVA fighting positions outside the main complex. They opened up with AK’s and RPG’s. Somehow, somehow… somehow they missed Sol, Mother and I. I heard an RPG whoosh through the air as I juked and zagged like Jim Brown breaking into the Steeler’s secondary on a short gain. We all three threw ourselves to the ground after running 20 meters or so. I was pretty shook up, but we yelled for an M-60.

We were directing the M-60 to fire on the positions we had just seen and it seemed to be effective. Enemy fire had died down. Then we heard Kuhn yell that he was hit. We managed to keep suppressive fire on them and slip by and haul ass back to the LZ.     There, the Kit Carson Scouts were in a celebratory mood. Sol had whacked a commie soldier.  I was feeling a lot more somber.

A day after this, one of Alpha’s platoon leaders, an NCO, asked me about checking out the bunkers. I just pointed in their direction and said, “150 meters that way, you can’t miss them.”