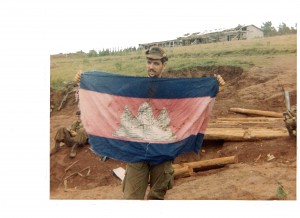 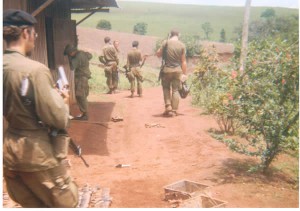 “Standin’ on a corner in…” O rang, Cambodia. This has got to be the ultimate war souvenir/photograph.  Damn,  I shoulda had Cossey take my photo with this!

That honor goes to Bruce Hammonds of Bessemer, Alabama displaying the  Cambodian National Flag in the traditional blue and red with the temple at Angor Wat.

Recon walked into O rang early in May, 1970. There was a hospital, school, army base and an airstrip there. That would be a grass and dirt airstrip, of course. Not too impressive looking, but it turned out to be key to keeping US troops supplied during the invasion.

American strategy had turned away from pacification… and was now focused on interdicting supplies. So there we were in O rang. I have to say, my thoughts were neither of strategy nor pacification. I was thinking, “Man, l hope l can find a good souvenir!”

Well, there wasn’t a soul in O rang. We checked all the buildings, homes and army base. Some of the conversations were of this nature;

“ There’s a flush toilet in that big house.”

Where the hell was the NVA 7th Division & all their friends?

‘ol LT and the fellas, dey wuz sent in dar for to hav a looksee, an dey looked hi an low, dey looked fur an dey looked wide, but dey never found so much as a coon track in da mud.

So O rang was “secured”. As much as an understrength platoon can secure a town anyway. There was a little excitement when the guys found some rusty muskets at the army post. Just a handful and by the time I got there all l found was an old broken flare pistol. I carried it around awhile, had my photo taken with it, but soon discarded it. We had to carry everything and I wasn’t about to tote that around with me.

I did find a black beret that fit & was quite pleased with that…until l found out what a worthless piece of headgear that would be in the monsoon rain. The southern monsoon rains were due to start anytime. Not that it was on my mind, l still was looking for that souvenir.

The coming monsoon was a growing concern for anyone in logistics. There were no allied airfields outside VN. The “incursion” was ordered on short notice under tight security and everyone in the 1st Cavalry, 25th Infantry and 11th Armored Cavalry was scrambling to see that supplies could reach the troops. The ARVN were attacking the sanctuaries in the Parrot’s Peak region and needed supplies as well. The smaller cargo planes could land on a grass strip like that and bring in the much needed artillery shells, small arms ammo, food, medical supplies. Everything an army on the move needs to carry out a mission. The problem was, if the monsoons were to start as normal, it make an airstrip like that unsuitable for the cargo planes. So far, so good. The weather was beautiful for now.

We were already hearing that one of the companies from the 1/5 had discovered a tremendous cache of weapons and ammo. So extensive that it had been dubbed “The City”. But that’s another story. Apparently the NVA had pulled out without much of a fight.

Recon had come from a patrol (& a firefight) while checking out a NVA medical complex. It wasn’t much of a firefight, really two different events. In the end, no one from Recon was hurt and two NVA were dead.

Our short time in O rang seems idyllic now. We were picking fresh pineapple from the plant, the weather was gorgeous and we seemed completely isolated from the war; which had just shifted to a higher gear with a massive incursion into Cambodia. Seemingly, for just a few days, we had shifted down.

In the days to come, we would find the NVA; defending their cache sites where they had stockpiles of ammo, weapons and rice hidden in the jungle. These enemy troops were not like the grungy VC we had chased through the rubber plantations…”The Michelin” back in Tay Ninh province. These were regular soldiers with khaki uniforms, boots, AK’s, rocket propelled grenades and those stick grenades that flipped end over end when they threw them at us.

I will never forget brothers. I hope all is well with you.

Note: Despite Cambodia’s violent history, it is still a kingdom and this flag still flies over the country.