You are here: Home / General / The attack on FSB David

Early in June, 1970, there were small probing attacks on the firebase of the 1st Bn/5th Cavalry. By Saturday, June 13th, there was a reinforced company of North Vietnamese “sappers” gathering in the wooded ravines around the base. The sapper units were the elite of the NVA, and received camouflage uniforms, chinese rifles with folding stocks & other specialized gear for they were expected to assault the heavily fortified firebases & airbases of the American forces. This was the monsoon season in Cambodia. Mists & fog were shrouding the ravines where the sappers were concealing themselves. That night, many of the enemy stripped down to their black shorts for it was difficult, if not impossible to make their way through the concertina wire & trip flares wearing clothing & boots. Some retained their their uniform shirts & wove grass into the backs so they could remain hidden even on the grassy hillside. In addition to rifles, they carried grenades, satchel charges, RPG’s, knives & pistols. In the early morning hours of Sunday the 14th they would attack the firebase to inflict losses on the American forces and, if possible; overrun the base & destroy the artillery.

Fire Support Base David was situated on a beautiful hill in Eastern Cambodia. The hills there are rolling & grass covered with deep ravines. From a security standpoint, an outstanding location for a base…clear views & fields of fire. David was well defended with artillery; a battery of 105mm howitzers provided the “fire support”. Echo company’s mortar platoon was there to provide their close in fire support, as well as, fire illumination rounds. Echo also had a heavy weapons squad that manned & maintained the Browning .50 machine guns that were placed in the bunkers around the perimeter. Their CO was Cpt. Micheal Crutcher. Delta Co. was there as well, they were pulling guard duty for the base. They did this in rotation with the other line companies (CO-Cpt. Bill Vowell). There was a medical unit there, of course. Cooks, clerks, radio operators & all the personnel to man a battalion, including the T.O.C., the tactical operations center (Battalion CO-Col. James Anderson). This night was one they will never forget. 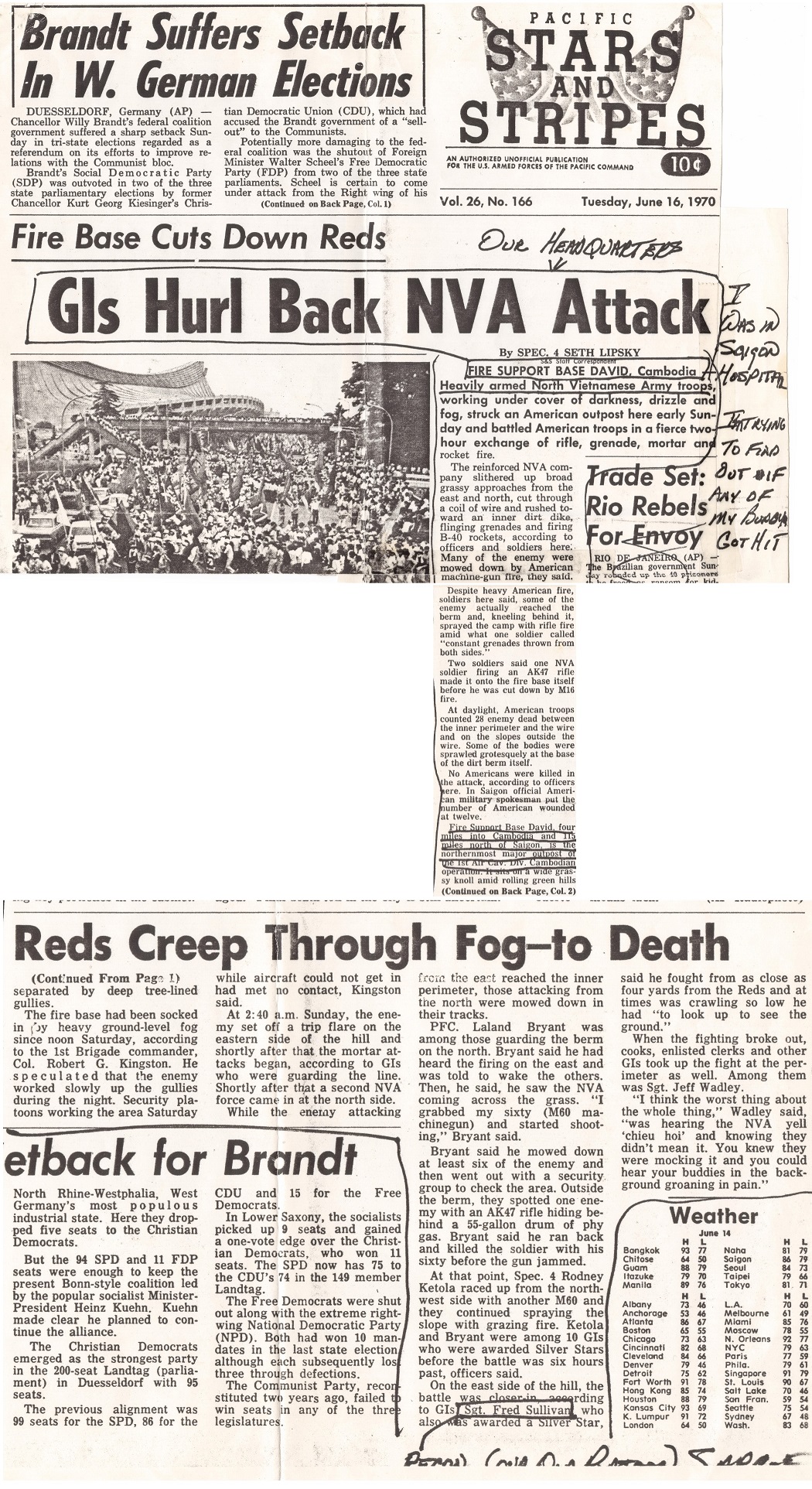