You are here: Home / scrapbook / livermore / The Highground Memorial

I had the great honor of participating in a ceremony at Wisconsin’s best known veterans memorial, The Highground. It is a 140 acre memorial park honoring all veterans of all conflicts. The first night we walked back onto the “Highground” (our FSB Phi Ma near Loc Ninh) after my first 6 days out with EchoRecon was April 1, 1970. We were put on 100% alert and told to expect human wave type assaults or sapper attacks. We did not get hit that night, but the fire support bases north of us along the Cambodian border did. FSB Illingsworth and FSB Jade were overrun. We could see the fireworks over Illingsworth and see Puff the Magic Dragon working out. I did not know it until a couple of weeks later when I received a copy of the local newspaper in the mail but a good high school friend of mine was killed on Illingsworth that night. His name was Tom Murphy. He was small in stature, but a fierce competitor on the athletic field and just a great friend off the field. You could never meet a happier, nicer guy in the whole world.

About two weeks ago his brother, Bill, sent me a note asking me to join the family in laying a Legacy Stone in memoriam to Tom in the walk at The Highground. As it would happen I was talking to Degree about it and he said they were attending a wedding in Eau Claire, WI and would meet us for breakfast on Saturday and then he and Donna would come out to The Highground with Mary and I for the ceremony. In addition, a good friend of mine, Erwin Daniels, who was stationed with Tom Murphy drove all the way from Cincinnati, Ohio to be there.

It was a beautiful day and we all arrived in the lot at the same exact time as did my friend Tom Murphy’s family. It was a great reunion of spirits and the healing started right there in the parking lot. My friend from Ohio, Erwin Daniels was very close to Tom and had always regretted (as I had for 32 years) that we had never gone and spoken to the family about our friendships with Tom and our knowledge of the events surrounding his death. There was much emotion shared prior to speaking a word. A young lady I worked with had asked me about 3 weeks ago if there were any names on the wall I would like a rubbing of as her young daughter was going to the wall on a school trip. I had asked for one of Tom Murphy and one of Tim Brown. She brought me back two of each and so I was able to give one to Tom Murphy’s family. They were very pleased as they had never received one or been to the wall.

Tom’s bother, Bill, brought the Legacy Stone over for Erwin and I to hold prior to setting it in the ground and it was certainly an overpowering moment for us. Degree joined us in recognizing our 1st Cav Brother before the stone was set.

After the ceremony setting the stone in the walk (there were about 9 stones set that day) all persons present formed a circle and we passed a microphone and a vial of soil from the walk around the circle. Each person had an opportunity to speak to honor those they had come to memorialize. It was very emotionally charged and truly a humbling experience.

Once that was completed, the circle disbanded by the first person going to the second and greeting them. Then they went to the third person and the second person followed until all had circulated around and greeted one another dissolving the circle. Needless to say we were all proud to be veterans and to be honoring not only Tom Murphy that day but all veterans of all conflicts.

An interesting twist happened too. Degree had done a rubbing of a man’s name, Maurice Haas, fora friend of his who wasMaurice Haas’ cousin. He had showed it to me in his scrap book when we arrived at The Highground. As the ceremony was unfolding we heard the name Maurice Haas announced! We went to watch the laying of the Legacy Stone and it was beingplaced by his sister. Degree and I introduced ourselves and after the ceremony Degree showed her the rubbing in his scrapbook. What a sweet coincidence! She is the gal in the white jacket laying a stone in one of the photos.

I hope you all enjoy these photos and thoughts. Go to Leigh’s poem, The Highground 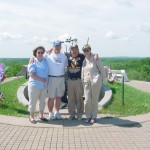 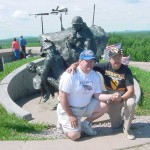 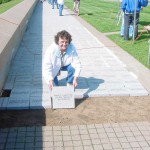 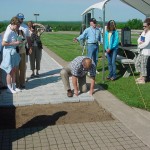 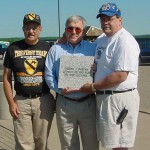 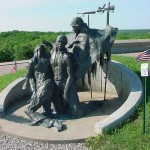