You are here: Home / blog / There’s a River in Cambodia

There’s a river in Cambodia and I don’t rightly know it’s name. It flows west toward the mighty Mekong. It crosses under National Hwy 7 just south of Snoul.

Early in May, 1970 Recon was beating the bush in Cambodia much like we had back in Tay Ninh province in VN. Suddenly the battalion radio came to life. Lt. Jenkins and Recon were being “extracted” ASAP and ordered to “secure the bravo on the blueline”.  Soon we found a suitable LZ and the Hueys were coming in to pick us up. A blueline is a term for river or stream and soon we were jumping from the birds onto Hwy 7 near this river where the engineers had built a new bridge, from what looked like a giant erector set. There was a lone engineer sitting on a bulldozer waiting to be picked up. He was sure glad to see Recon. We formed a perimeter around the bulldozer and waited for a Sky Crane to fly in and pick that dozer up. Job well done. Now Recon had more time to check out our surroundings. There was an interesting house built on stilts near the river and we began to think we might be able to stay somewhere with a roof over our heads.

Later that day, the battalion CO called again, wanting to know if the “bravo” was secure. Hell, that bulldozer was gone. Oh shit, “bravo” means the damn bridge. Yes Sir! The old bridge was blown by the retreating NVA and the new one was there so the 11th Armoured Cavalry could get through to Snoul. We were supposed to be guarding it! 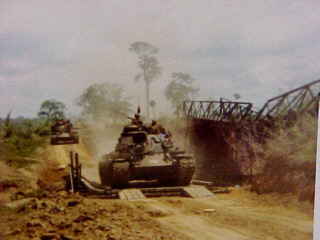 We had just been waving to the tankers as they rolled through…“Hey Fellas!”

It was getting dark now and a small group of us double timed down to the bank and laid down there to try and keep an eye on things. A couple of guys went onto the bridge and set up a trip flare with a wire across the bridge. It was a restless night. Sure enough, in the wee hours of the morning someone tripped that flare. A lone NVA no doubt, but no one saw a weapon, no one fired, he skedaddled out of there in a hurry. Could have been a Cambodian soldier or a civilian (not likely). Probably a lone NVA trying to get back to his unit.

Sgt. Cossey said we were actually lying in the road that night. I have the vaguest recollection of that. I do remember we passed around a bottle of whiskey. Coz said he had just brought that back from the rear. I’m sure Martin and Sgt. Corn were glad of that. Coz said there were 2 engineers with the bulldozer. Both had a M-16 and an extra magazine, but didn’t seem too worried. Just on your own in Cambodia with less than a 100 rounds and the sun going down soon! No worries!

So the bridge was secure for now. Recon was on the job. We were also the most popular guys around. Everyone, meaning all the Cambodes, wanted to use that bridge. 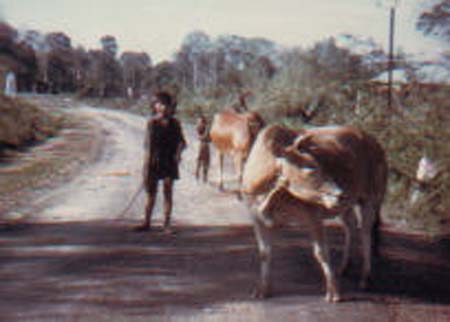 People with cattle, carts, bicycles and families. Our scouts said they were wanting to get to the market in the next town. The NVA wouldn’t let them use the old bridge apparently. We had 3 Kit Carson scouts with us, all Cambodes: Chou San, Chou Sinh and Doung Solkes (aka Sol). So we had no problem communicating with the villagers. They told us that a Chinese soldier had blown the old bridge so that no vehicles could cross but a person on foot still could. 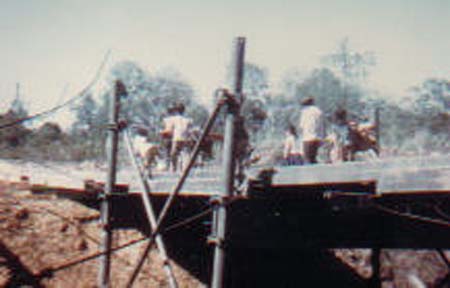 Somewhere in there, I turned 21 years old. It wasn’t until after my birthday, May 8th, that I realized it had passed. Well, everyone remembers where they were when they turned 21. This is where I was, alongside a dusty road in Cambodia.

No regrets, I had wanted an adventure and I got that. I was a foot soldier, a “grunt” in a reconnaissance platoon of the 5th US Cavalry.

We were hearing that our line companies were in “contact” (fighting) with the NVA troops in the area. There were rumors about a tremendous cache site captured by Charlie Co. Could be the largest capture of enemy material in the war, but we hadn’t seen anything like that. We had been cussed out by an old man on an elephant the first day of the invasion. We didn’t need a translator for that! I didn’t blame him, an invasion like that put everyone in danger, friend or foe, innocent villagers and children, all at risk.

It must have been the second day we were there, a group of us were standing alongside the river upstream from the bridge where some villagers were checking their fish traps. Woven from bamboo strips laced together, they were like something out of the stone age. One of our group suggested going fishing with a hand grenade. This proposal was greeted with approval by everyone present as soon as it was translated for the villagers. Keep in mind this is a rather narrow, shallow river. So this trooper pulls the pin on a grenade and casually lobs it into one of the larger pools. Ka Boom! The muffled explosion of a grenade under water and immediately at least a dozen stunned fish float to the surface; the villagers wade in and scoop them up with their baskets. Everyone, villagers and GIs alike, were extremely pleased with the outcome of this adventure and the Cambodes headed out to cook their fish.

A few days later, we would be sent into a NVA medical bunker complex where we would enter the “shooting war”, having it out with a couple of enemy soldiers and calling in airstrikes on a larger group. They paid with their lives and no one in Recon was seriously hurt.

But for now we were getting fresh fruit from the villagers and like I said, we were the most popular guys around.

Photos: All photos from this website. That first one of the tanks is from Livermore. I’m not sure about the rest. Cossey, Hutchins and Cossell all carried cameras that I know of, certainly others did. Good job, guys!