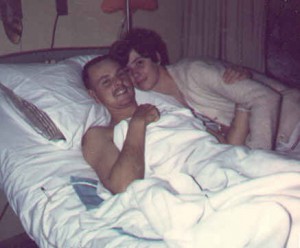 Fort Riley, KS (July 1, 1970)
Just before an emergency transfer to Denver Fitzsimmons General Army Base due to a kidney failure resulting from antibiotics. 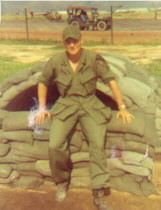 Following the incident with the AK round on 6/13, I spent 357 days in Army hospitals (Evac. Hospital, Japan, Fort Riley, Kansas & Fitzsimmons Gen. Army in Denver, Colorado). I battled serious hip infection and malaria, which resulted in my weight dropping from 170 lbs. to a low of 107 lbs. While at Fitzsimmons, Donna joined me in Denver for the long haul.

After 5 years of Temporary Duty Retirement, the Army decided to offer me permanent retirement. No problem, I accepted.

Following my release from Fitzsimmons, Donna and I returned to Wisconsin and to my previous occupation with the Wisconsin Department of Natural Resources. I was stationed at Cadiz Springs State Park, Interstate Park, Southern Unit of the Kettle Moraine State Forest, and then finally at Mirror Lake State Park where I have served as the Part Superintendent since 4/79. Meanwhile, Donna, a registered nurse, when back to school and secured her Bachelors, and Masters Degree in Nursing from the University of Wisconsin. Donna now works as a Nurse Practitioner in Madison, Wisconsin. While we were accomplishing all of this, we adopted our first son, Ryan. We then had time for two natural born, a second son Robin, and Laura our daughter. As of this spring all three will have completed their Bachelors Degrees (Creative Writing, International Affairs, and Psychology, respectively). None of the youngsters are married – yet!

As for what I remember most about ECHO RECON, I would have to say the experience of being in a foreign country (countries), the great cultural differences that exisited, and being scared beyond description for 24 hours a day every day. I have since found it impossible to explain what it was like in Viet Nam and Cambodia to persons who have no idea what living in the jungle, and combat was like.

I have to say that the afternoon I was wounded was an incident that I will never forget, but the most memorable experience was the firefight of 6/11/70 in which we walked on line into the four NVA bunkers. I definitely had the feeling during this firefight that we had gotten into some deep shit. I found that one could empty 20 magazines of ammo fairly quickly (mind you that I was firing 3 round bursts all the time, but you know one cannot divide 3 into 19 and come out with a full round). I developed a reverence for the two Cobra Chopper pilots who got us out of that mess with the mini-gun fire. It was unfortunate that the rocket air burst got some of the good guys. I still smile when I remember that David Martin wanted to put a “50” on a “Mule” and go back into the bunker complex and kill some more gooks! I was plenty satisfied with leaving them alone at the time and getting over the shakes. I also remember helping carry a dead Combat Engineer over the trip wires on our automatic ambush to the LZ the following day following Mother’s incident with the ice cream and the Purple Heart. David “Bird” Adams is a Saint.

This was the Good, the Bad, and the Ugly.

I can say the 13 days with the 1st of the 5th Echo Recon were the most memorable 13 days of my life. It was a pleasure to become reacquainted with the Sky Troopers that I spent 13 very long days with.

Whad’ya mean, I did not volunteer for this!